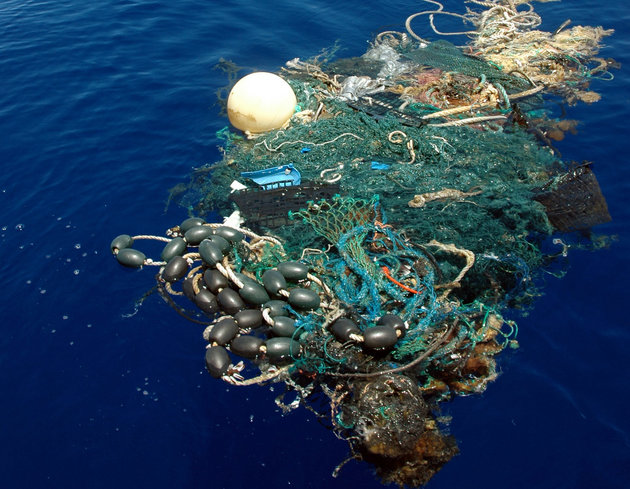 The first aerial survey of the Great Pacific Garbage Patch shows that the amount of debris swirling in the North Pacific has been “heavily underestimated,” the expedition group said.

On Monday, The Ocean Cleanup, a project founded in 2013 by then-18-year-old Dutch inventor Boyan Slat with the goal of ridding the world’s oceans of plastic, shared initial findings from its aerial expedition of the trash vortex between Hawaii and California.

Researchers documented more garbage at the edge of the gyre than they expected to see at its center, where debris is more concentrated, Slat said at a press conference at Moffett Airfield in Mountain View, California. In just 2 1/2 hours, he said, the crew observed more than 1,000 large floating objects.

“Although, again, we still need to get a detailed analysis of the results, I think it’s really quite safe to say that it’s worse than we thought,” Slat said. “This underlines the urgency of why we need to clean it up and that we really need to take care of the plastic that’s already out there in the ocean, because all this big stuff, over the next few decades, will crumble down into those small microplastics.”

Understanding how much marine debris is out there will be essential to Slat’s ambitious plan to clean it up, the foundation said.

A patch of sea garbage at sea in the Pacific Ocean.

For several years, the young engineer has been working on garbage-collection technology and plans to eventually deploy a 62-mile, underwater, V-shaped barrier to clean up the Pacific. The technology takes advantage of natural ocean currents to concentrate the garbage so it can more easily be collected.

“Instead of going after the plastic using nets and vessels, which would take an infinite amount of time, we developed this system,” Slat told The Huffington Post last year. “The plastic moves toward the center, and therefore the concentration increases 100,000 times. You really can walk on the water.”

The organization hopes to deploy its Pacific array in 2020 and says it could remove almost half of the Great Pacific Garbage Patch ― more than 150 million pounds of trash ― in a decade.

The aerial survey, which continues through Oct. 7, seeks to better quantify the most harmful debris in the Pacific, including abandoned fishing nets. Using human observers and advanced sensors, the organization is mapping the area from a C-130 Hercules aircraft named Ocean Force One.

The project says data collected during these low-altitude flights will be combined with the findings of last year’s “Mega Expedition,” during which some 30 vessels covered a 1.4 million-square-mile area between Hawaii and the U.S. West Coast, tracking plastic debris.

“I’ve studied plastic in all the world’s oceans, but never seen any area as polluted as the Great Pacific Garbage Patch,” Julia Reisser, lead oceanographer at The Ocean Cleanup, said in a statement following last year’s survey.

A solution to the planet’s decades-long addiction to plastic cannot come soon enough. A report in January found that if we continue our current ways, the world’s oceans would contain more plastic than fish by 2050.

The current aerial survey, Slat said Monday, “really brings us another step closer to initiating the largest cleanup in history.”

Garbage In The Pacific Ocean

Garbage In The Pacific Ocean

Rubbish is strewn along the beach in Anguan village, Hainan, China, on June 13, 2011.

The Clean Air Act Was Supposed To Protect Us. Here’s Why It’s Not

Digitalisation of energy and its implications