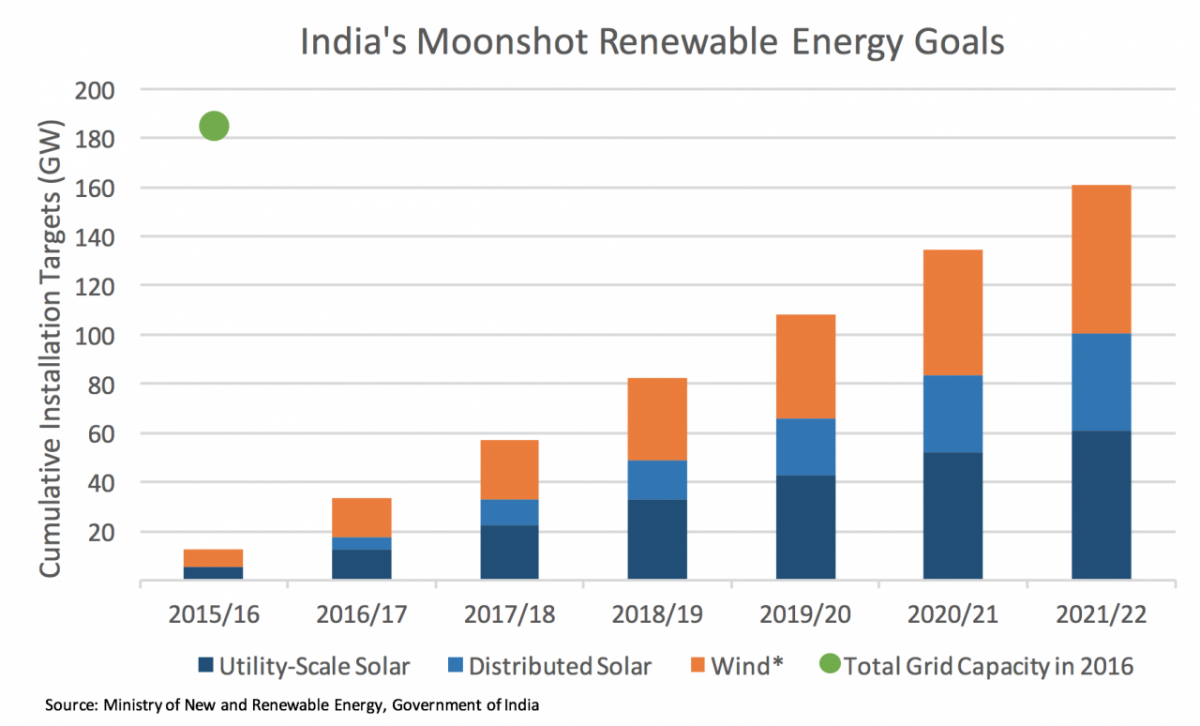 India ratified the Paris climate agreement this week, officially underscoring its commitment to reduce greenhouse gas emissions. Yet just two years after embarking on an ambitious campaign to scale up renewable energy, India is facing a curious problem: too much solar and wind power in some parts of the country.

In July, for the first time, the southern Indian state of Tamil Nadu was unable to use all the solar power it generated. Later in the month, Jayaram Jayalalitha, the chief minister of Tamil Nadu, wrote a letter to Prime Minister Narendra Modi urging him to speed up the construction of an inter-state green energy corridor that would allow renewable power to be transmitted and used in other states instead of being wasted.

From India to China to Chile, a significant portion of future renewable energy could go to waste without careful planning.

Solar and wind only accounted for 3.5 percent of the power generated in India in 2015. But if the government achieves its ambitious targets for renewable energy deployment, the amount of solar and wind power on the grid could quadruple by 2022. Yet there are already signs that the grid’s ability to absorb these new power sources could be a major bottleneck for renewable energy growth in India, jeopardizing the country’s energy and climate goals.

Although there is not clear national data, regulatory filings from Tamil Nadu, where the problem is thought to be the most extreme, put the curtailment rate for wind power between 33 percent and 50 percent — an astonishingly high figure. 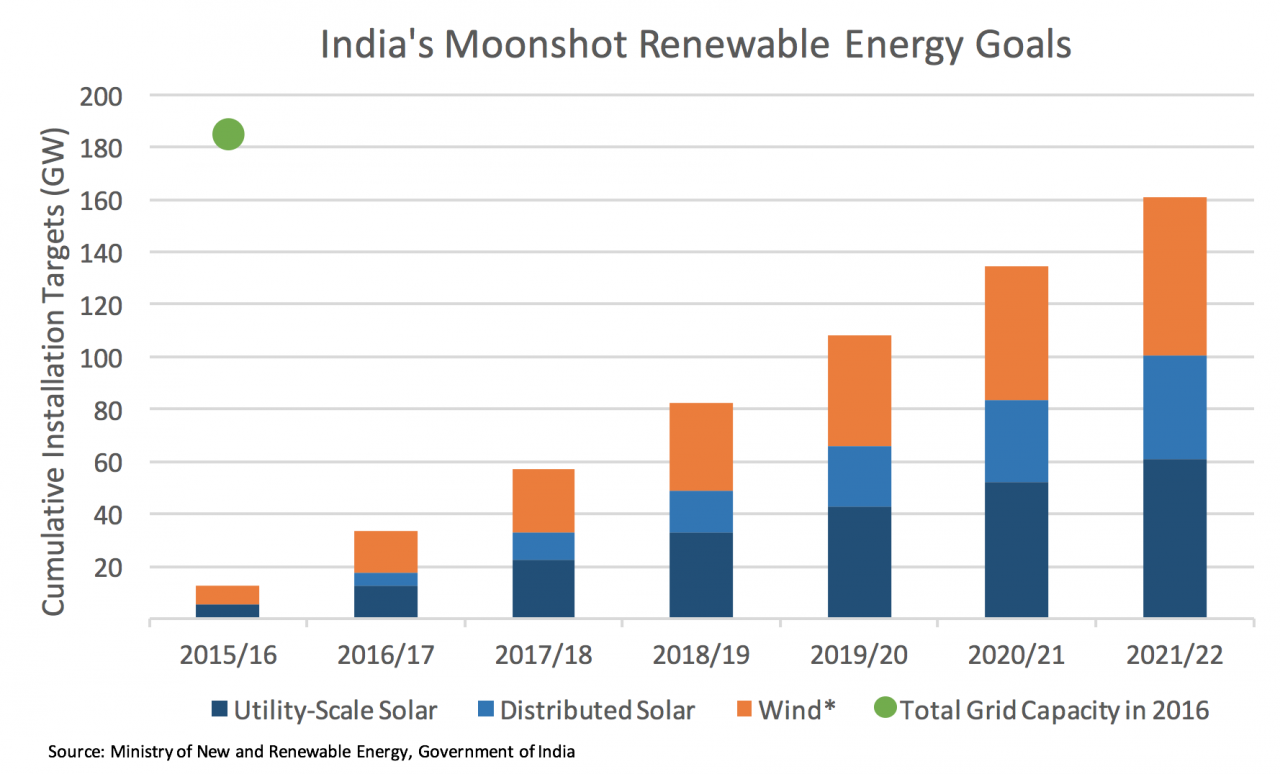 The problem is, in part, a technical one. Solar and wind power are not as easy to control as traditional fossil fuel plants, so power grids need to become flexible enough to handle last-minute changes in power generation.

Distance is also an issue. In India, six states in the western and southern regions account for 80 percent of all of the country’s currently installed solar capacity, but only 38 percent of power demand. For grid operators used to being able to turn fossil fuel plants on and off at will, these changes can take some getting used to. If new measures are not put into place to accommodate variable renewable energy sources, a situation can arise where the physical grid — or the grid operator — is unable to use solar and wind power when it becomes available.

Other countries have already dealt with this problem with varying degrees of success. Germany and the U.S. have relatively high levels of solar and wind penetration and low curtailment rates, while China has had major issues with curtailment as the share of wind and solar in the energy mix increases.

Indeed, China currently has more wind and solar power capacity than any other country in the world after scaling up very quickly. In the five years between 2010 and 2015, the share of solar and wind power generated in China quadrupled. Yet in 2015, the U.S. still produced more electricity from wind than China, despite having only 58 percent of China’s installed wind capacity. A large reason for this discrepancy is that much of China’s solar and wind power is wasted: 21 percent of wind power was curtailed in the first half of 2016 (with Gansu province reaching a 47 percent curtailment rate), and solar curtailment reached 11 percent in the first three quarters of 2015.

Although China has been able to build out renewable energy capacity quickly over the past decade, it has taken much longer to develop the transmission infrastructure and make the institutional changes required to utilize all of this new power.

How can India learn from China’s mistakes and rapidly scale up renewables without waste?

Luckily, the challenge has not caught Indian policymakers by surprise. There are already a number of initiatives underway to help integrate renewables into the grid. Perhaps most important is that, unlike China, India already has a wholesale power market, which can provide much-needed flexibility for utilities to buy and sell power at short notice.

There is also the aforementioned green energy corridor, a series of transmission lines that will connect states with excess renewable energy to areas where there is demand. And similar to China, solar and wind already have “must run” status, meaning that any power they generate should always be accepted by the grid.

Yet even these steps may not be enough. A recent survey found that 31 percent of senior corporate leaders in Indian solar companies think that grid integration will be the biggest challenge for expanding solar in India going forward.

The first priority for India when addressing this issue is to finish the green energy corridor and other new transmission lines so that renewable power can be transmitted where it is needed. There are significant power surpluses in some states and power deficits in others.

For instance, Uttar Pradesh has a peak power deficit of 9.7 percent (meaning 9.7 percent of demand at peak times cannot be met with the power available in the state), whereas the bordering state of Madhya Pradesh has a peak power surplus of 8.3 percent. Yet the power connection between the two states was at full capacity 73 percent of the time in May 2016, meaning some surplus power in Madhya Pradesh may not have made it to Uttar Pradesh. Nationally, 10 percent of the power supply available on the short-term markets last year could not be used because of transmission constraints.

New investment in inter-state power lines will help balance out such disparities. It is particularly important for India to attract private investment in these projects. The green energy corridor will cost an astounding USD $3.4 billion, and is funded in part by government funds and partially by a $1 billion loan from the Asian Development Bank and €1 billion loan from GiZ. But the public sector can only fund so many multibillion-dollar projects, and many state utilities are already in poor financial conditions.

Private capital is projected to be required for 47 percent of infrastructure investment in India between 2012 and 2017. India’s planning commission has created a framework for public-private partnerships for transmission investment, but land acquisition and permitting are still major roadblocks for private developers hoping to complete a project on schedule. Reducing the time and cost of land acquisition will be essential to making infrastructure projects attractive to developers and unlocking the private capital needed to finance transmission lines.

Second, focusing on deploying distributed energy technologies like rooftop solar can help increase the amount of renewable energy in use where new transmission lines are infeasible or too expensive.

India hopes to get 40 percent of its solar capacity from rooftop solar by 2022, but the market has been slow to take off despite a 30 percent capital subsidy from the government. The barriers to rooftop solar deployment are often more institutional than technical. In China, slow subsidy disbursement and a lack of financing have caused rooftop solar deployment to fall short of government targets. In India, a recent survey found that 93 percent of senior corporate leaders in the Indian solar sector did not think the country would even reach half of its rooftop solar target by 2022, citing ineffective net metering policy, unavailable and expensive financing, and consumer awareness as top issues.

There are a number of potential solutions: Training for distribution utilities unaccustomed to having customers generate their own electricity; streamlining the application and approval process; creating certifications to ensure installer quality; and even allowing rooftop solar systems to serve as backup power when the grid goes down. Quickly implementing such solutions can allow renewables to grow without worsening curtailment.

Energy storage can also play an important role in reducing curtailment. The cost of storage is still a major barrier to mass adoption, but prices are dropping quickly.

Finally, India can look to other countries to find grid planning and operational solutions to help manage curtailment as renewable power scales up. One such change, highlighted in a recent Paulson Institute report on curtailment, is to create financial incentives against curtailing renewables.

Currently, Indian solar and wind generators are not compensated for curtailment, and compensation should not be necessary because renewables have “must run” status. However, financial incentives can help reinforce such regulations when mandates alone are insufficient. China has had a similar experience with “must run” mandates: multiple policies have stated that solar and wind should always receive priority on the grid, but curtailment continues to be an issue because there are few penalties for ignoring this regulation.

A recent regulation released by China’s National Development and Reform Commission requires that coal plant owners pay wind or solar plant owners whose energy is curtailed, creating a stronger incentive for grid operators to fully utilize renewables. An even simpler solution would be to compensate solar and wind projects for any curtailed energy at a fixed rate. This not only penalizes grid operators that choose to curtail renewables, but also provides more certainty for power producers when trying to forecast revenue.

Even smaller changes to how the grid is operated can make a difference. In Texas, grid operator ERCOT shifted from 15-minute dispatch intervals on the intra-day market to 5-minute intervals, allowing for more granular planning around variable wind and solar power plants. (India currently uses 15-minute dispatch intervals.) ERCOT also shifted from targeting 0 percent curtailment to a maximum acceptable curtailment rate of 3 percent of annual renewable energy production — a more cost-effective solution than trying to utilize every unit of electricity generated at peak times.

Such institutional changes can provide flexibility to the grid without the high risk and cost of major new transmission and storage projects.

India has already set a moonshot goal for renewable energy deployment that would have been unthinkable just a few years ago. Indeed, in the five years between Copenhagen and Paris, India went from being a hindrance to an enthusiastic participant to in the United Nation’s global climate negotiations.

Yet a successful energy transition will require a broader change in the infrastructure and institutions that support renewables — not just targets themselves.

Jamie Manley is a program associate at the Paulson Institute.